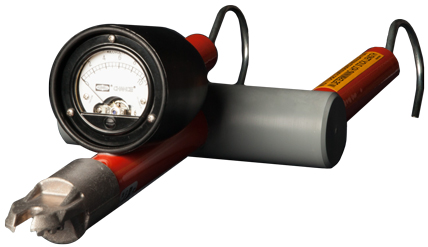 A sensitive voltmeter, the tester measures the difference in potential across each insulator in a suspect string. Comparative readings from satisfactory strings in the same operating situation quickly indicate the state of every insulator in the string being tested. The meter places only a minimal load on the phase as it requires only a small leakage current to make a reading.

Two straight steel probes threaded into the tester forks simply contact the metal fittings on both ends of each insulator at the same time. Mounted on a 1-1/4″-diameter Epoxiglas® pole with a universal fitting, before each use the tester should be attached to the proper length hot stick for the system voltage involved.

Without interrupting service, one of these testers quickly can check the condition of each insulator in a string. This greatly reduces maintenance costs. Rather than changing out entire strings, only the insulators identified as damaged require replacements.

Available in two models, the testers serve specific applications: One for dead-end insulators on distribution systems through 35 kV, and the other for suspension insulators on 44 kV through 500 kV transmission systems.

Plug-in jack on Insulator Tester meter housing permits line personnel to quickly verify its operable condition with a CHANCE® Phasing Voltmeter Tester (Model# C4030838) before and after each use.

Need a repair on your product?
We do calibrations and repairs on many of our products. Click here to visit our repair information page.

Need assistance or parts?
Please feel free to contact us and we will do all we can to help. Click here to visit our contact information page.